FIG participated in the annual Green City Market Barbecue last Thursday, but rather than rehash all of the preparation that went into that particular event or provide an incomplete review of the event (I only got to try 1/4 of the samples and there are much better reviews with pictures on LTH Forum, Sky Full of Bacon, and I’m sure more to come.) What I thought I’d do instead was cause a little controversy. Not much, just a little.

Although this was the first year we’ve participated in the BBQ, we have had an ongoing relationship with the GCM. We have been doing chef demonstrations there for three years (including one coming up on Aug. 1) and even before that were regular shoppers frequenting Seedling Enterprises, Kinnikinnick Farm, Brunkow Cheese, and Nichols Farm. We love the fact that GCM supports local farms, we love the fact that they promote sustainable and organic agriculture, we love the fact that they’re open on Wed. and Sat. and just last year started opening all year round (the winter market is held indoors or under a tent at the Peggy Notebaert Museum).

Now to the controversy. Although we love and appreciate the GCM, nobody and nothing is perfect. Here are some of our gripes.

Strict Rules: I love the fact that GCM encourages local eating, but sometimes it’s to the extreme and confusing. They kicked many bakeries out of the mix this year, including Bleeding Heart and Delightful Pastries, even though both of these companies have made sincere and often monumental efforts to comply with their requirements (without damaging their product). Every baked good available at the market must be made with all local ingredients and yet somehow I samples a slice of olive bread at Bennison’s over the winter (do you know where I can get local olives?)

Disorganization: Although we’ve volunteered to do chef demos for the last two summers, had just done a demo at the winter market, and always take a last minute spot when asked, we were somehow missed when it came to scheduling chefs this summer. Until we noticed that the entire schedule was already up on their site and we weren’t on it, we didn’t even know. We choose a date and were scheduled on August 1, but it took them over 2 months to include us on the website.

This generally fits under disorganization as well. Being curious, we inquired about participating in the BBQ. I never heard back from the GCM Director and assumed they already had a full roster. Months later, someone on LTH Forum posted the list of participating chefs and I was surprised to find my name listed. Although we were excited to be included it would have been nice to know how big the commitment was before we were included on the official list. Of course, we ended up having a blast, and Justin will share the recipe for our Arugula, Fennel, Cherry Salad with Grilled Trout and Heirloom Tomato Vinaigrette soon.

Lack of Respect: Recently I was asked to do a Sprouts (kids) demo on July 8th, I agreed and expected to be promoted as usual (at the market, on the website, in their newsletter) and was dismayed when my demo was moved to a diffent time the day prior and NOT included in the newsletter. We have fun doing chef demos, but they do take some time and involve product cost for us. In return for this time and cost, we hope to be promoted the GCM’s customers. It sucks that GCM doesn’t seem to value us as much as the chef’s with PR agencies behind them.

For all of its flaws, the GCM is still one of the best things in Chicago and we hope they only improve with age. 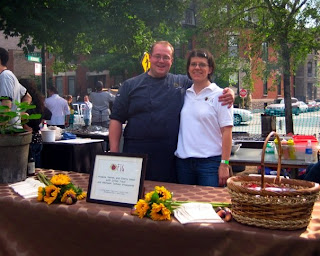 Care Packages are SOLD OUT - thanks for your support!

Need some wine and cheese? FIG is delivering care

We’ll be serving up some delicious soup at tomor

Thinking about your snack plan for #superbowlliv?

Walk through with @naturallychicagoorg for the Win

This Sunday we'll be at @loftonlake, but you can t

Free tickets and a chance to win $800 towards your

It may be holiday party season, but we’re still